Thank you! Your submission has been received!
Oops! Something went wrong while submitting the form.

What we start from and first evacuation 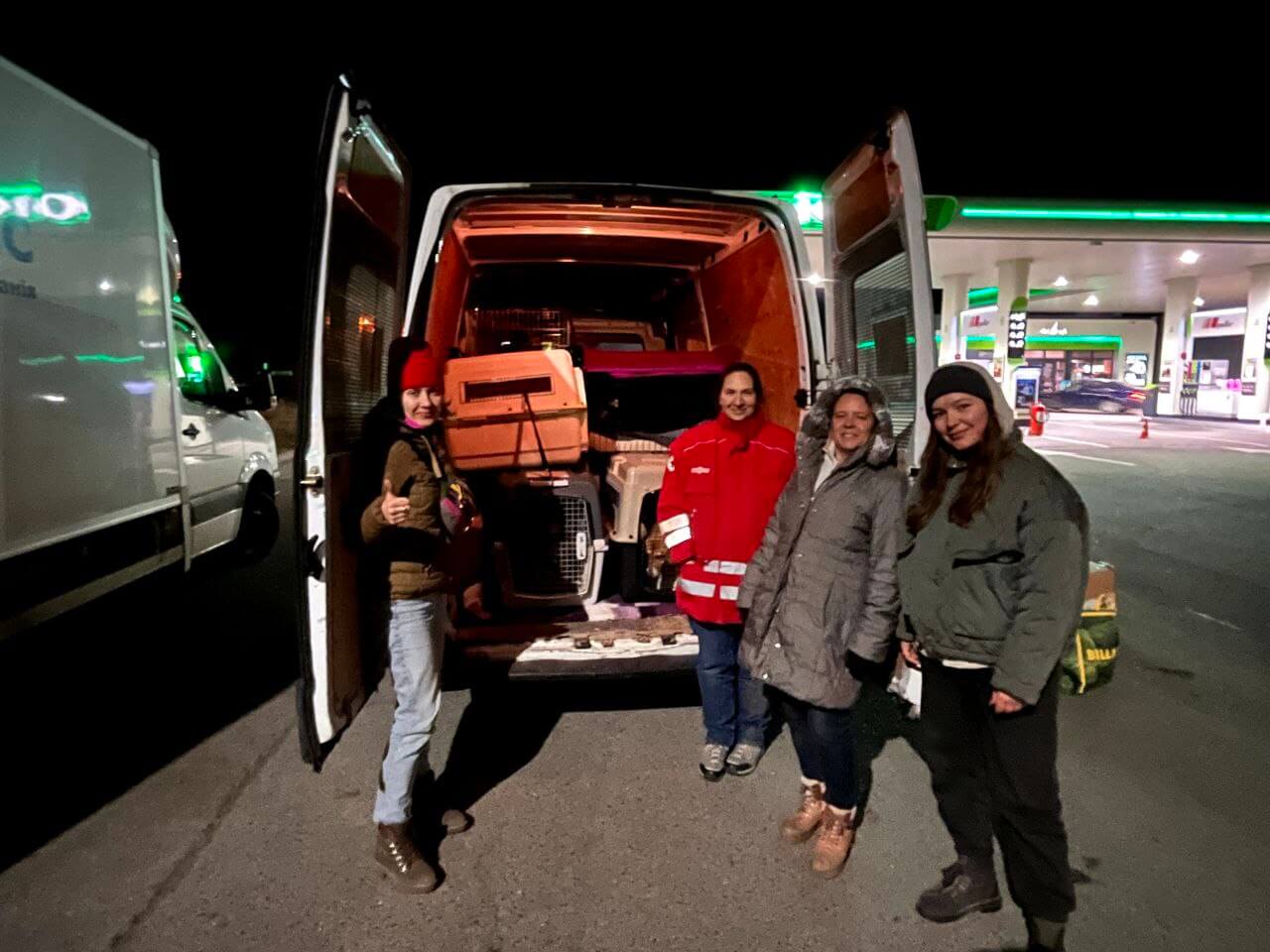 It is this story that begins the story of the origin of the idea and the creation of the foundation, the choice of activities and everything that is due. It all started with the fact that CNN magazine wrote about the activities of the hotel during the occupation of Kyiv, and that evening there was no time for sleep. Immediately, many people began to write kind words of support and a desire to help financially. But among all these messages, there was another one with a proposal to find new families for animals in need. Of course, it was impossible to miss such a chance, besides, the other day before this message, there was a successful example of the evacuation of a dog that was in a Dog City hotel. The opportunity to save the dogs and return several of them to their owners was very inspiring and it was decided to try this idea. Girls from Austria came up with northern responsibility and we discussed all the documents and nuances on our part in advance. We sent them profiles of different dogs and they immediately looked for new homes for them. 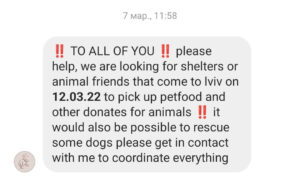 The only thing that complicated everything was the nuance that the window of the meeting with the Austrians was very limited and it was necessary to adjust to their date and time, and there was no way to move this hour X from our side. And most importantly, it was necessary to organize everything in 4 days. These were the most intense and sleepless days, but by the time the dogs were loaded into the car, 11 out of 15 were already going to certain families, and not to foster home or shelter.
Initially, we were looking for a van or cargo to deliver all the dogs to the border, or at least to Lviv. We advertised in instagram stories and either we are so naive or it played a role that the war had only recently begun and a lot of people tried to unite and help, we thought that everyone was like that, but alas, it turned out that not all of them. We found one cargo, paid an advance, but, unfortunately, we were scammed. We sincerely hope that we were simply scammed for money, and the person is alive, because on such days, unfortunately, he could die in the war. Therefore, we did not hold evil on him, because life is more important. Because of this situation, on the day when dogs had to leave, we found ourselves without a van and everything was about to fail … 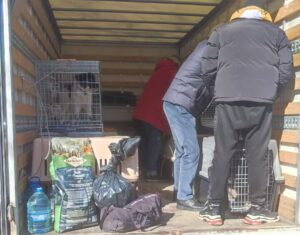 By some miracle, it so happened that at breakfast I was given the contact of a transport company that agreed to transfer the dogs to the border, and even the transport was available and within an hour from the call the car was already under load. We loaded all the dogs into the cargo, fixed them well and sent the children to a new life. Of course, the driver cannot give proper care to the animals, he needs to take care of others things, so a wonderful girl went as an accompany, who helped us very, very much: walked them, fed them, watered them, cared for them, made sure that they feel good. Let me remind you that it was March 10, when the war had just begun, everyone was afraid to do anything, go somewhere, and all the roads were in endless checkpoints and checks. It takes a lot of courage to agree to such a trip. Therefore, special thanks to Yana.

They moved much faster than we expected, and already at 3 A.M. they were in Mukachevo near the border. Our car was at the meeting point 15 hours ahead of schedule. But as usual, the road can be unpredictable, and this time the volunteers from Austria had a difficult road. Several times there were unpredictable circumstances, queues and they had to stop often. As a result, they were 4 hours late from the scheduled time. Fortunately, Yana was not alone, Olya came to her, who also helped to keep track of the dogs for such a long time, so they don’t have to sit in cages all the time. To simplify the situation, Yana and Olya decided to drive directly to the border, so that the guys from Austria would travel less kilometers through the territory of Ukraine, because it is also exciting to move in a country where there is a war. 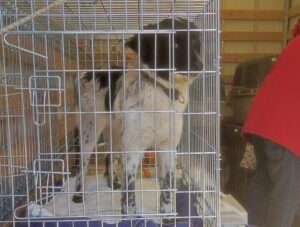 For several hours, volunteers from Austria did not get in touch and did not answer either messages or calls, that we already began to think that everything was in vain and no one would come. But as law-abiding people, they simply did not pick up the phone while driving, and crossing the border also took longer than they expected. And although 2 complete vans for transporting dogs arrived from Austria, they all were put in one van. Everything should have been fine, all the dogs were well-behaved, they had all the passports and documents in their hands and nothing foreshadowed trouble.

But then a call at 2 in the morning – dogs are not allowed without explanation, everything will not work out, panic. The second car without dogs was let through and they left, and one woman with all the dogs was alone in the car and it was not clear what to do. On such an early morning, there is no way to call someone and solve anything, so after an hour of throwing in hysterics, we decided that we needed to get some sleep and in the morning to solve the problem gradually. At 6 am they again tried to pass the border, but again failed. Then we decided that it was worth changing the strategy and going across the border of another country. In addition, the distance of the road made it possible to somehow resolve this issue. 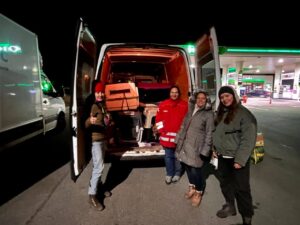 The stress was not only on our side for the dogs that we sent to a seemingly better life, but also on the new owners from Austria, who were also very worried and several of them teamed up and got into cars ❤️ towards the border to go and pick up their new pets from the border and, of course, to help a woman from Austria who has been driving for the third day and was very tired. And no matter how big the world is, but thanks to modern technology and the ability to communicate remotely, the issue was resolved and after several hours of standing at the border, our car with dogs was let through and finally we were able to breathe deeply.

As in any movie, miracles and passions happened here, when we were sure that everything was lost, that we would not return the dogs and it was not clear whether everything would be fine with them. And during the wanderings of dogs between the borders, another miracle happened, all the dogs that were traveling in the car found their new owners and went to loving families, even dogs with difficulties, for example, who need lifelong treatment. And although the trip was difficult both morally for us and for the dogs, it was worth it 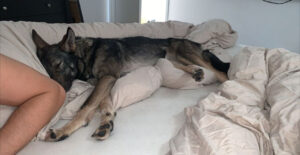 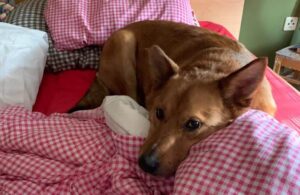 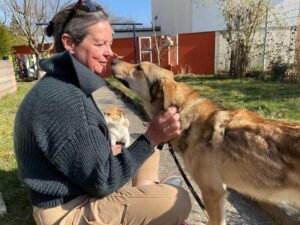 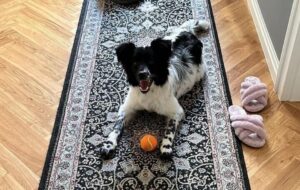 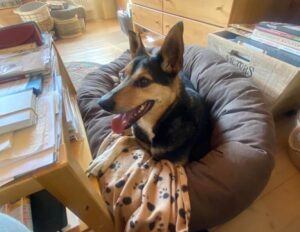